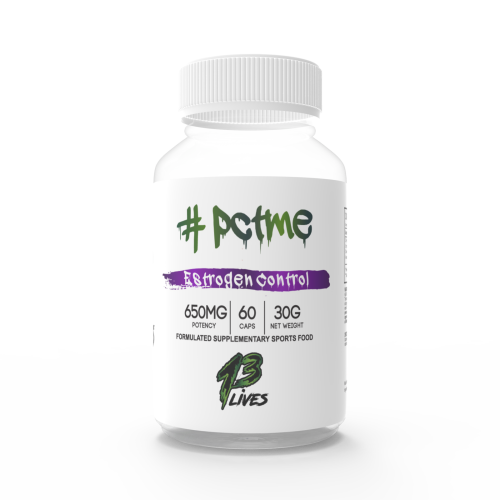 What it is / May assist with:

What it is formulated to do:

#PCTme is the one of the most comprehensive post-cycle-therapy products on the market. It maintains a high level of protein synthesis via 5α-hydroxylaxogenin and inhibits aromatisation via an Anti-Estrogen proprietary blend. The combination of these two products allows you to stay anabolic whilst getting rid of any unwanted estrogen from the body. To revitalise testosterone and reduce impacts of cortisol, ashwaganda and divanill have also been added to the formulation.

5α-hydroxylaxogenin is an anabolic compound that is derived from certain plants in nature. It belongs to a group of plant-based steroids called brassinosteroids and can act as a point for semisynthesis of steroid hormones. The effects of 5α-hydroxylaxogenin work on the basis of assisting smaller molecules being built into larger molecules. It has been predicted to increase protein synthesis up to 200%. In relation to athletic performance in humans, it has become very effective in assisting recovery and repair of muscle tissue that may be broken down/damaged during intense periods of training, whether aerobic or anaerobic.

A common issue faced in a post-cycle phase can be an imbalance of estrogen in the body. This is where an aromatase inhibitory compound such as 5a-Hydroxyecdysone comes into play. It works by binding to the aromatase enzyme which causes aromatization and stops testosterone from being converted to estrogen via mechanisms in the cell. By doing this it allows your body to revitalize its natural levels of testosterone without the unwanted side effects of excess estrogen.

Ashwaganda has been increasingly popular due to its effects on lowering cortisol. It is also known to have a strong ability to raise natural testosterone levels and increase sperm count and motility in both fertile and infertile men. A study took place that involved ashwaganda being prescribed to males, after a 3-month period, 14% of the men from the experiment had made their partners pregnant. The study showed that it was correlated to an increase in sperm quality. Raising free natural testosterone levels is vital for not only males but also females as it improves overall wellbeing and body function. Women can sometimes be put off by the notion of raising testosterone levels, however, women naturally have this in their circulation.

Divanil is a compound found within stinging nettle. It is yet another compound which has a strong ability to revitalize natural testosterone levels. In the human body, testosterone can be bound to an albumin called sex hormone binding globulin (SHBG). Divanil binds itself to this albumin to eliminate the potential of testosterone being bound.