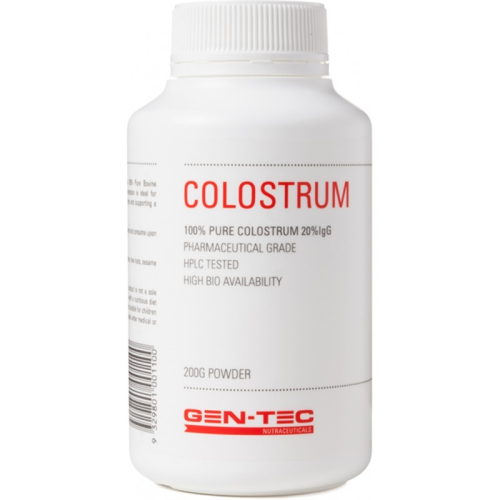 BASIC FUNCTIONS Gut health, Immune support, Improved recovery
Bovine Colostrum is a dairy derivative that possess various physiological benefits in exercising individuals. This nutrient dense protein is secreted into the cows milk from the mammary glands during the post-natal period (Daley, 2009). Its contents are various immunological compounds which have antimicrobial properties as well as ergogenic potential. These compounds are what’s referred to as immunoglobulins (Ig), in particular IgA, IgG and lactoferrin (Daley, 2009). What Colostrum does is increase gastrointestinal integrity, immune function and recovery from intense exercise which is extremely beneficial to anyone who simply can’t afford to get run down (Shing et al., 2009).

Research has shown that the ingestion of Colostrum decreased upper respiratory tract reports for infectious symptoms by 50% more than a placebo (Crooks et al., 2010). It has also has been universally reported to provide an enhancement in anaerobic performance and may assist with the increase of mucosal IgA which supports mucosal immunity from infections due to intense exercise (Bishop, 2010, Buckley et al., 2003, Crooks et al., 2006). In 2006 a study on long distance runners found that the consumption of colostrum increase salivary IgA (immune protein that fights off infection) compared to the placebo group (Crooks et al., 2006). Furthermore a study in 2002 analysed the effects colostrum had on a group of elite hockey players and found that the consumption of 60g.day of colostrum increased sprint performance (Hofman et al., 2002). In support of this is the data from a study at the University of Tasmania where it was reported that the consumption of colostrum improved recovery following consecutive days of high intensity training, thus colostrum appears to a play a role in both health and performance in the exercising population (Shing et al., 2009)

pared to the placebo group. Similar results have been replicated in other RCT where CM has improved either recovery from repeated anaerobic bouts or enhanced performance by promoting aerobic energy production and muscle oxygenation (2-6).
CM can also be used therapeutically to detoxify the body as CM is very effective at eliminating toxic compounds within the intestinal system which is believed to lead to fatigue and lethargy. Citrulline malate has also been demonstrated to stimulate the release of human growth hormone at rest compared to placebo, however the significance of this is not known to date.